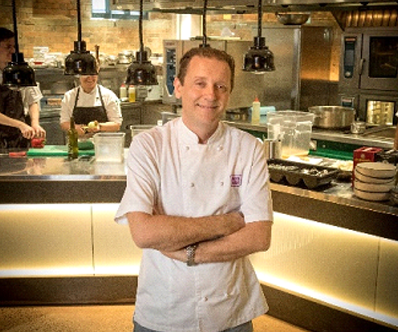 Since opening his classic Edward Street restaurant in 1999, Javier Codina, Chef de Cuisine was quick to establish a reputation for cuisine which is distinctive and highly awarded. His menus are created using the best local produce and by blending influences from France, Italy, and his native Barcelona.

Combining a diverse array of flavours with delightful imagination, he produces a harmonious blend of classical and new cuisine, which has brought high praise from critics and patrons. His excellent relationship with growers and suppliers allows him to secure the best local and national produce, personally visiting the markets most mornings before daylight to select ingredients which fuel his daily inspiration.

Javier’s achievements at the helm of Moda have been recognised by his growing clientele of regular patrons and celebrities alike, as well as with numerous awards achieved over the years. Javier has worked in some of the world’s finest dining rooms including The Arts Hotel in Barcelona, The San Francisco Ritz Carlton and the exclusive Chewton Glen Hotel in Hampshire, England. He has also been invited for guest appearances internationally and nationally in Singapore, Sydney, Canberra, Brisbane, Noosa, New Zealand and the place closest to his heart, Barcelona.

As well as his professional commitments, Javier is a dedicated supporter and contributor to numerous charities including the Starlight Children’s Foundation in Brisbane. He regularly generously donates his time and talents to four of their annual Five Chefs dinners and was a creator of the Next Generation Chefs Charity Lunch. In 2011, Javier, his family and business partner Francois Le Saveant became Australian citizens. Although they called Australia home, embracing our culture, food, wine and community, this heartfelt occasion holds one of their most precious lifetime memories.