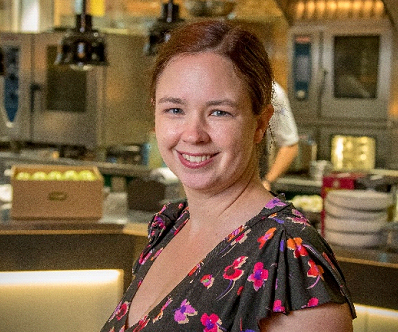 Juliette started her love for hospitality after high school, starting a traineeship at The Brisbane Polo Club. Learning skills in white glove and silver service. This formal training was a fantastic basis for starting a career in hospitality.

After two years, Juliette made a moved on to work at the newly opened Pig and Whistle at Indooroopilly working her way to Restaurant Supervisor and Events Manager before setting her sights on the United Kingdom. During her two year working holiday she worked in an awarding winning Gastro Pub The Kings Head in Winchmore Hill and traveled through France, Spain, Portugal, Ireland and Scotland before heading for home.

Upon her return she starting as a Restaurant Coordinator at Bretts Wharf Seafood Restaurant. During the 7 years at Bretts Wharf, she worked her way to Wedding and Events Sales Manager. Being part of the team that catered for events from 10 up to 3000 guests. When Bretts Wharf closed, a fantastic opportunity to work for The Pony Dining group as the Business, Development and Sales Manager. This was a fantastic experience being part of the team opening the iconic restaurant in the Eagle Street Pier precinct, before taking maternity leave with her son.

A chance incounter with Javier Codina as at the Tenneriffe Festival was the perfect next step to joining the team at Moda on Edward Street. After a brief maternity leave following the birth of her daughter and retunirng to the new location at The Barracks in October 2018 as Moda Tapas Brasa Bar.