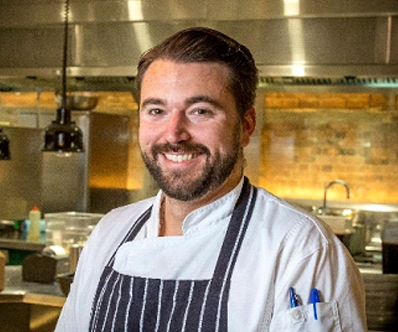 Josh started his love for food in high school working in a Steakhouse in New South Wales. He started his apprenticeship at The Cricketers Arm Hotel before moving to the Sunshine State. Once arriving in Queensland, he worked as an apprentice at The Romain Empire a Pizza, Pasta Café. This is where he honed his skills on making pasta and breads.

As a 2nd Year apprentice Josh started at Cinco Bistro and worked his way during his 5 and half years to Sous Chef. At Cinco, Josh was able to explore Modern Australian and Modern European food in a suburban location with a loyal following.

Josh jumped at the chance to join Javier and his team at Moda Restaurant on Edward Street (now at The Barracks in Petrie Terrace) and has been a part of the kitchen for 8 years moving up to Head Chef. Josh has really enjoyed learning all things seafood. His favourite dish Javier has taught him is our Catalan Zarzuela – a traditional seafood stew making the best of the local seafood Queensland has to offer.

Josh has really enjoyed our move to The Barracks, with the large open plan kitchen with fantastic equipment such as our MIBRASA oven making it possible to engage with our customers. Due to the size of the kitchen at Edward Street, the team had to use more traditional skills to deliver the award-winning menu. At our new location with brand new equipment there is no limit to what they can create.
Josh has also enjoyed getting to know all our suppliers and developing relationships with them and their produce and having the flexibility to explore our fantastic produce with our ever-changing menu.